A son of Gamekeeper.  He has had a great show career and has sired many champions, obedience titled dogs and Guide Dogs for the Blind, was top Golden Retriever in the National Dog Competition for 1997, 1998 and 1999″.  Wil is Goldtreve’s first Grand Champion and we are very proud of his achievements.

Kyva has acquitted himself well in the showring and is a multi Best in Show All Breeds winner.  Sire of conformation champions, obedience champion, obedience titled dogs, Guide Dogs for the Blind and Pets as Therapy.  Certainly a very versatile dog.

A son of Gamekeeper by frozen semen method.  Storm was titled at 12 months 3 days with a Best Exhibit in Group, followed the next day with BEST EXHIBIT IN SHOW.  He gained his SUPREME CHAMPIONSHIP TITLE at 2 years 8 months, with another BEST EXHIBIT IN SHOW

GOLDTREVE’S FROZEN SEMEN (for our own breeding requirements)

GOLDTREVE is the ONLY Kennel that holds semen from English Ch Camrose Cabus Christopher, England’s top sire of all times.  Goldtreve Goldens are line bred to Christopher and they also combine the best outcross bloodlines,  Goldtreve is the only Kennel to have a direct link to this great dog.  Hopefully, in the future, there will be more Christopher children bred at Goldtreve.

Christopher was the top sire in the U.K. with a total of 26 title holders, and a total of 50 worldwide. He won 41 challenge certificates (this has only been surpassed by his double grandson with 42 CC’s), 2 Best in Show awards, 4 Reserve Best in Show awards and 8 Group awards, all at championship shows. He was runner up to the Top Dog 1974 and crowned these achievements by winning the Contest of Champions.  He also showed his prowess as a working dog.

Gamekeeper has left his mark as a sire, with at least 25 champions, 4 Grand Champions and a Supreme Champion.  Hopefully there may be more in the near future by frozen semen method.

Kyva, a multi Best in Show winner, has also proved himself as an excellent sire, producing many champions. 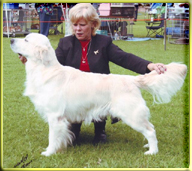